Progesterone is a steroid hormone in well evolved creatures that is Engaged with the female menstrual cycle, pregnancy and embryogenesis. The term progesterone also is used for natural or synthetic steroids that have progesterone-like action on the body. Progesterone has a place with a class of sex hormones called progestogens. Progesterone is the crucial progestogen made in ovaries, particularly in the second half of the menstrual cycle after the occasion of ovulation and the course of action of a corpus luteum by the void follicle [1].

Progesterone is a steroid hormone. A steroid is any of a group of natural or synthetic, fat-soluble, organic compounds belonging to the class of lipids and characterized by a molecular core of four fused rings totaling 17 carbon atoms: Three six-carbon rings and one five-carbon ring fused together. The type of steroid is determined by the three-dimensional configuration and the type of additional side chains and rings [2]. 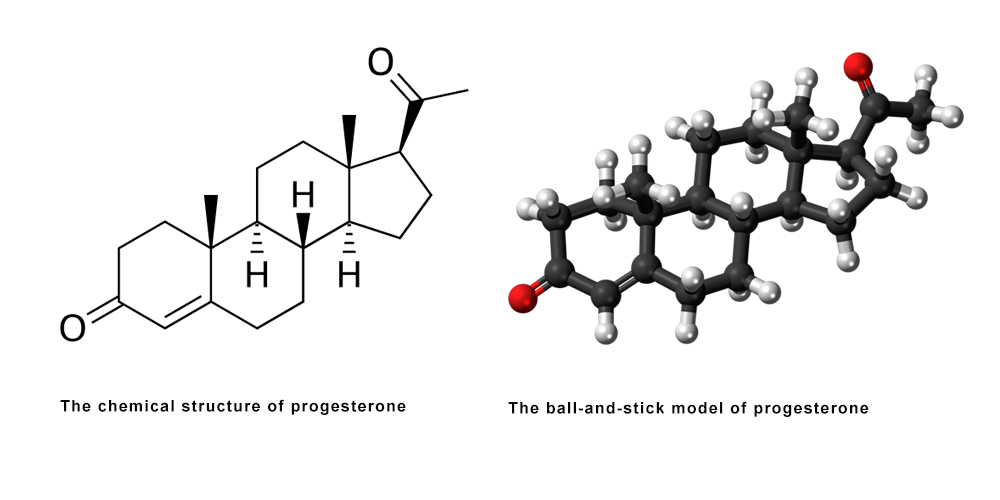 1). Role of progesterone in Pregnancy

Progesterone has been called "the hormone of pregnancy" due to its basic part in supporting the endometrium (uterine covering) and thus the survival of the conceptus .In people, expanding measures of progesterone are delivered amid pregnancy [3]. However, after the eighth week, creation of progesterone moves over to the placenta. The placenta uses maternal cholesterol as the underlying substrate, and the vast majority of the created progesterone enters the maternal dissemination, however some is gotten by the fetal course and is utilized as substrate for fetal corticosteroids. At term the placenta creates around 250 mg progesterone for every day [4]. 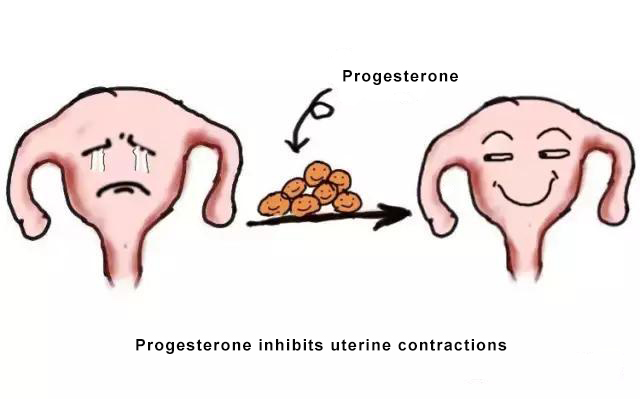 2). Progesterone levels during the menstrual cycle

Progesterone is a key component in the complex regulation of normal female reproductive function. The major physiological roles of progesterone in the mammal are following.

In the uterus and ovary: release of mature oocytes, facilitation of implantation, and maintenance of pregnancy, by promotion of uterine growth and suppression of myometrial contractility;

In the mammary gland: lobular-alveolar development in preparation for milk secretion and suppression of milk protein synthesis before parturition;

In the brain: mediation of signals required for sexually responsive behavior. Recent evidence also supports a role for progesterone in modulation of bone mass.

The importance and diversity of roles of progesterone in normal female development and reproduction [5].

The use of progesterone and its analogues have many medical applications, both to address acute situations and to address the long-term decline of natural progesterone levels. Because of the poor bioavailability of progesterone when taken by mouth, many synthetic progestins have been designed with improved bioavailability by mouth and have been used long before progesterone formulations became available. Uses of progesterone include hormone replacement therapy, birth control, support of fertility and pregnancy (e.g., prevention of preterm birth and miscarriage), and treatment of gynecological conditions [6-7].

Transvaginal ultrasonography can clearly characterize ovulation time and is perceived as the standard reference examination for identifying ovulation. Being obtrusive, costly, and badly arranged, this method isn't comprehensively utilized; it is utilized mainly in gynecological centers and is regularly executed as a stage in manufactured conceptive strategies. Utilizing serial ultrasonography examinations, the season of ovulation can be resolved as the point between most extreme follicular distance across and follicular collapse [8].

Signs of ovulation include the following

• Free liquid in pelvis (or pocket of Douglas).

LH has a place with a gathering of glycoprotein hormones that offer a typical a subunit, and biological specificity for every hormone is given by their disparate b subunit. While serum estradiol (the most strong estrogen discharged by the dominant follicle) concentration achieves a limit level (more prominent than 200 pg/ml for roughly 50 hr), a positive input instrument deals with the hypothalamus and foremost pituitary organ, which brings about an unexpected emission of LH into circulatory system. The beginning of the LH surge goes before ovulation by 35– 44 hr, and the pinnacle serum level of LH goes before ovulation by 10– 12 hr.11,12 An investigation of 155 cycles from 35 ladies exhibited that the beginning of the LH surge basically happens amongst midnight and early morning [10].

In 1906, Theodoor Hendrik van de Velde saw a biphasic change of BBT in females amid feminine cycle. Checking of BBT has turned out to be one of the easiest and slightest intrusive strategies to distinguish ovulation. The rise of BBT comes about because of the thermogenic impact of progesterone. Amid the follicular period of the menstrual cycle, BBT keeps in the lower run, by and large in the vicinity of 97.0 and 98.08F, until roughly 1 day before ovulation, when BBT achieves its most reduced point (nadir, or drip). After ovulation, the corpus luteum begins to release progesterone. The BBT rises 0.5– 1.08F and plateaus all through the luteal stage. In late luteal stage, when the corpus luteum relapses and serum progesterone level abatements, the BBT comes back to the lower run inside 1– 2 days prior, or exactly at, the beginning of menstrual bleeding [11].

Serum progesterone level of under 3 ng/ml is predictable with follicular stage levels. To affirm ovulation, values at mid luteal stage ought to be at least 6.5 ng/ml and ideally 10 ng/ml or more. There is regularly poor connection with the histological condition of the endometrium. There are no reliable methods for diagnosis of progesterone deficiency during luteal phase or early pregnancy. Progesterone secretion is pulsatile. Blood levels extend from 2 to 40 ng/ml inside a short era. Blood levels are not solid for deciding the requirement for or impact of luteal help. There is no least serum progesterone fixation that characterizes luteal capacity. Random serum progesterone levels are hard to decipher past reporting ovulation， Endometrial biopsy is no longer the gold standard for assessment of endometrial maturation [12].

The progesterone focus in blood tests can be used as a marker for the conclusion of early pregnancy, endocrinopathy and virilism. Here, we depict a technique for progesterone identification and estimation in entire blood tests by a surface sensitive biosensor utilized as a part of conjunction with an incorporated optical grinding coupler. This device determines refractive index changes near the biosensor’s surface. Henceforth, natural species bound to a surface layer can be estimated continuously with no label. For the estimations, we have altered the backhanded aggressive immunoassay rule. The grouping of the progesterone immunizer was kept at 1 mg/ml. Progesterone focus was resolved in cushion arrangement and entire blood in a range in the vicinity of 0.005 and 10 ng/ml. As far as possible was resolved to be 3 pM. The relative standard deviation was figured to be 3.5% [13].

A protein connected immunosorbent examine (ELISA) for progesterone estimated in serum or plasma samples using penicillinase as label enzyme is reported. A C3 and C11 derivatives of progesterone were prepared and conjugated to bovine serum albumin (BSA). Polyclonal antibody against these two immunogens were set up in New Zealand white rabbits. Purified Ig fractions of antibodies were immobilized onto the wells of microtiter plates. Progesterone 3-(O-carboxymethyl ) oxime was linked to penicillinase and used as tracer (enzyme-conjugate). The standard assay completed within three hours had a low limit of detection, from 5 pg/well (50 pg/ml) covering up to 1 ng/well (10 ng/ml). Without precedent for this test the shading advancement if there should be an occurrence of penicillinase as compound mark was estimated in the wells specifically. Recuperations were estimated to be inside the scope of 95-98%. Percent Coefficient of varieties (CV %) acquired between and inside keeps running of a few 7。examines were 3% and 7% individually. At the point when looked at between estimations of progesterone estimated by radioimmunoassay (RIA) and present ELISA technique, a relationship estimation of r = 0.9 was btained. Dried Progestrone-enzyme conjugate was found stable for at least three months at 4° C without using any other preservative [14].

Effective reproductive management is a pivotal worry in the dairy industry and missed oestrus and late acknowledgment of unsuccessful insemination can prompt significant budgetary misfortune. Progesterone levels change in an anticipated way with advance of the oestrus cycle and with the beginning of pregnancy. We report here the improvement of a simple ELISA test for the estimation of progesterone levels in bovine milk. The strategy depends on the utilization of polyclonal antibodies raised against 11α-hydroxyprogesterone-hemisuccinate and rivalry for counter acting agent restricting locales between free progesterone and horseradish peroxidase-named progesterone. Binding is evaluated by methods for the shading response between horseradish peroxidase and 3,3',5,5'- tetramethylbenzidine. The strategy has ended up being a savvy, touchy and simple to perform other option to right now accessible strategies for oestrus and pregnancy detection. The reasonable feasibility of the method has been proven under dairy farm conditions [15].

Plasma and feces gathered from 11 rabbits amid a time of 42 days. Three unique strategies for P4 extraction were utilized. The total estimated by strong stage radioimmunoassay (RIA) with 125I-P4 as the tracer. Results proposed that it was conceivable to remove add up to P4 from rabbit excrement with methanol and oil ether. Plasma and fecal P4 profiles were thought about for both pregnant and ovariectomized rabbits. It was conceivable to separate aggregate P4 extracted from day two through 28 after breeding (p<0.01) [16].

9)．Sensor and Instrumentation for Progesterone Detection

A real time and noninvasive method to distinguish progesterone hormone concentration in purified water using Electrochemical Impedance Spectroscopy (E.I.S.) procedure. Planar capacitive sensor, consisting of inter-digitated microelectrodes, is designed and fabricated on silicon substrate using thin-film Microelectromechanical system (MEMS) based semiconductor device fabrication technology. The sensor in conjunction with EIS is used to assess conductivity, permeability and dielectric properties of reproductive hormone progesterone and its concentration quantification in purified water. Impedance spectrums are obtained with various concentrations of the hormone in purified water by using an electric circuit in order to extract sample conductance. Relationship of sample conductance with progesterone concentration level is studied in this research work. The capacity of E.I.S. to identify progesterone focus is intended to be utilized as a part of in dairy farming industry in order to obtain better reproductive performance of the dairy cattle [17].

Prev： A Comprehensive Interpretation of Proteins

Next： Review on Testosterone