According to latest research findings, Angiotensin-converting enzyme 2 (ACE2) found in the lower respiratory tract of humans, is probably the cell receptor through which SARS-CoV-2 enters cells, the same with SARS-CoV [1].

However, the transmission routine of this virus among hosts, the potential mechanisms for human-to-human transmission and pathogenic mechanisms of the SARS-CoV-2 are still unclear. Elabscience® provides the superior recombinant proteins for SARS-CoV-2 research.

Click on the links below to learn about important SARS-CoV-2 proteins:

SARS-CoV-2 structural proteins have important functions in pathogenesis as well as infectious virus assembly. These include Spike protein (S protein), Envelope protein (E protein), Membrane protein (M protein) and Nucleocapsid protein (N protein), which are all encoded by the 3’-end of the virus genome [10].

The S protein of Cov is an essential component for infection of the host cell, responsible for both binding to cellular receptors and subsequent fusion of viral and cellular membranes. The spike protein is a large type I transmembrane protein containing two subunits, S1 and S2. S1 mainly contains a Receptor Binding Domain (RBD), which is responsible for recognizing the cell surface receptor. Elabscience® provides SARS-CoV-2 high-purity spike protein and a variety of mutants with point mutation in the RBD domain (Spike RBD mutant protein) for your related research. S2 contains basic elements needed for the membrane fusion. The S protein plays key parts in the induction of neutralizing-antibody and T-cell responses, as well as protective immunity [11].

All coronaviruses express the E protein, a multifunctional short polypeptide involved in virus morphogenesis and virulence. SARS-CoV E protein contains an alpha-helical transmembrane (TM) domain that spans the lipid membrane, and it oligomerizes forming a pentameric structure that displays ion channel activity, a remarkable function for this protein that may affect virus host interaction [12].

The recently sequenced genomes of SARS-CoV-2 strains combined with the comparative analysis of the SARS-CoV genome organization and transcription allowed us to construct a tentative list of gene products [15]. It was suggested that SARS-CoV-2 had 16 predicted non-structural proteins (referred to nsp1-nsp16) constituting polyproteins pp1a and pp1ab, which were translated from ORF1a and ORF1ab of the virus genome.

Based on previous research on SARS-CoV, these non-structural proteins form a large Replication/transcription complex with a double membrane structure, which is responsible for the replication and transcription of the virus genome and subgenome. In this process, the non-structural proteins play individual roles and cooperate with each other as well [16].

Elabsicnece® offers key non-structural proteins of SARS-CoV-2 which are essential to virus life cycles. Nsp1 was proved to be able to suppress host gene expression by promoting host mRNA degradation and was involved in cellular chemokine deregulation. Nsp2 plays an important role in viral transcription and replication, and is an attractive target for anti-virus drug development. Nsp3 contains a papain-like protease (PLpro) domain, which is required to process the viral polyprotein into functional, mature subunits.Nsp5 is a proteolytic enzyme, known as a 3c-like proteinase because of its recognition sites are very similar to those of the viral 3C proteases of micrornas virus. Nsp7 forms a hexadecamer with Nsp8, they may work together and participate in viral replication by acting as a primase. Nsp10 plays a pivotal role in viral transcription by stimulating both nsp14 3'-5' exoribonuclease and nsp16 2'-O-methyltransferase activities, therefore plays an essential role in viral mRNAs cap methylation. Nsp10 is a critical regulator of coronavirus RNA synthesis and may be important in polyprotein processing. Nsp13 is a multifunctional protein with nucleoside hydrolase and helicase activity, it enables the unwinding of double-stranded DNA and RNA from the 5 '-3' end, powered by hydrolyzed deoxynucleotides and nucleotide triphosphate glands. Nsp14 has two different functional domains: an exoribonuclease domain acting on both ssRNA and dsRNA in a 3' to 5' direction and a N7-guanine methyltransferase domain. It may be involved in the proof-reading during the viral RNA replication and transcription [17]. 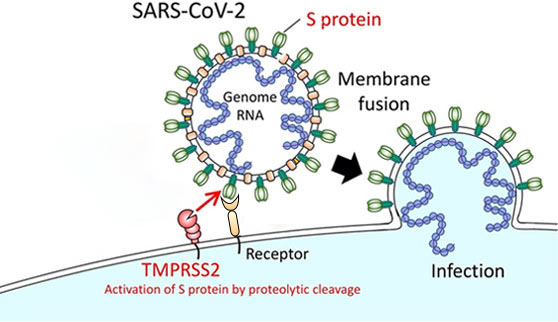 The invasion of host cells is the most important part of coronavirus (CoV) infection. The envelope spike (S) glycoprotein is responsible for CoV cell entry and host-to-host transmission. For productive entry into host cells, viruses attach to specific cell surface receptor molecules. This is the case of CoV, whose use of distinct entry receptor molecules is responsible for their broad host range and tissue tropism [18].

Several CoV of the genus alpha, including TGEV and hCoV-229E, use aminopeptidase N (APN) for cell entry [19], whereas hCoV-NL63 binds to the ACE2 [20]. In the beta-CoV, the SARS-CoV and the MERS-CoV use ACE2 and dipeptidyl peptidase 4 (DPP4) receptors, respectively [21]. APN, ACE2 and DPP4 are membrane-bound ectoenzymes with multiple functions such as angiogenesis, cell adhesion and blood pressure regulation. These three proteins catalyze peptide-bond hydrolysis of short peptides [22].

Similarly to SARS-CoV, SARS-CoV-2 employs ACE2 as a receptor for cellular entry, but the detailed mechanism of host cell entry is not yet clear [23]. Viral entry may also depends on TMPRSS2 protease activity and cathepsin B/cathepsin L activity may be able to substitute for TMPRSS2 [24].CD147 and CD299 may be involved in the virus invasion process as well [25].

Cytokine storm is a phenomenon of immune system disorder caused by the rapid increase of pro-inflammatory cytokine level after being stimulated by microorganism or medicine. The SARS-CoV-2 recognizes ACE2 to infect the body through S glycoprotein, which can replicate in large numbers [26], thus rapidly activating CD4+ T cells to proliferate and differentiate into Th1 cells and secreting proinflammatory cytokines such as IL-6、γ interferon and granulocyte-macrophage colony stimulating factor (GM-CSF). Among which, GM-CSF can activate monocytes to further release IL-6 and other factors, leading to cytokine storms that develop patients' conditions into acute respiratory distress syndrome (ARDS), multiple organ failure (MOF) and even death. Therefore, the IL-6 and GM-CSF that released by T lymphocytes and monocytes may be the key link in cytokine storms induces by SARS-CoV-2 [27]. And monocytes, as non-specific immune cells, which suggests that the mechanism of cytokine storms induces by SARS-CoV-2 may be closely related to the balance disruption of specific and nonspecific immune responses.